The Future of Transient Stability Simulation

As the power system industry adapts to meet the challenges of the modern power system so too must our simulation technology. At TGS we believe the use of dynamic phasors is one of the solutions!

Power systems are evolving faster than ever, incorporating more inverter-based resources and advanced HVdc transmission technology to meet the challenges of our modern world. As the power system industry adapts to meet these challenges so too must our simulation technology. Conventional transient stability simulation was not developed with modern power systems in mind and it is being pushed to its limits by the dynamics associated with new generation and transmission technology. Large scale EMT and hybrid simulation techniques are widely believed to be the future of transient stability simulation and analysis. However, we at TGS believe that the answer is not to abandon the ideas of phasor-based simulation but rather to adapt them using dynamic phasors.

Matthew Kulasza, power system specialist at TGS and Ph.D. candidate at the University of Manitoba, along with Udaya Annakkage, a founding member of TGS and a professor at the University of Manitoba, and Chandana Karawita, Vice President of Studies at TGS, recently published a paper titled “Extending the Frequency Bandwidth of Transient Stability Simulation Using Dynamic Phasors” in IEEE Transactions on Power Systems. They present a new method for transient stability simulation where dynamic phasors are used to enhance network, synchronous machine, and HVDC systems. Modified nodal analysis is used to construct dynamic equations and the variable step numerical solver IDA is used to properly leverage one of the major advantages of dynamic phasors, carrier frequency demodulation.

Matt has constructed a 440 bus test system with two LCC-based HVdc transmission lines embedded in the network. Both inverters and rectifiers are contained within the model and a multimass turbine was included in a generator located near one of the rectifiers. The images shown below illustrate the accuracy of our method in capturing subsynchronous torsional interactions between a generator and rectifier, phenomena previously limited to EMT simulation! Also, the new method runs a 20 second simulation in 10 seconds of CPU time while fixed-step EMT simulation needs approximately 20 minutes – a speed up factor of 120. We believe that very large systems such as North American systems can be efficiently modelled using dynamic phasors by utilizing parallel processing techniques. 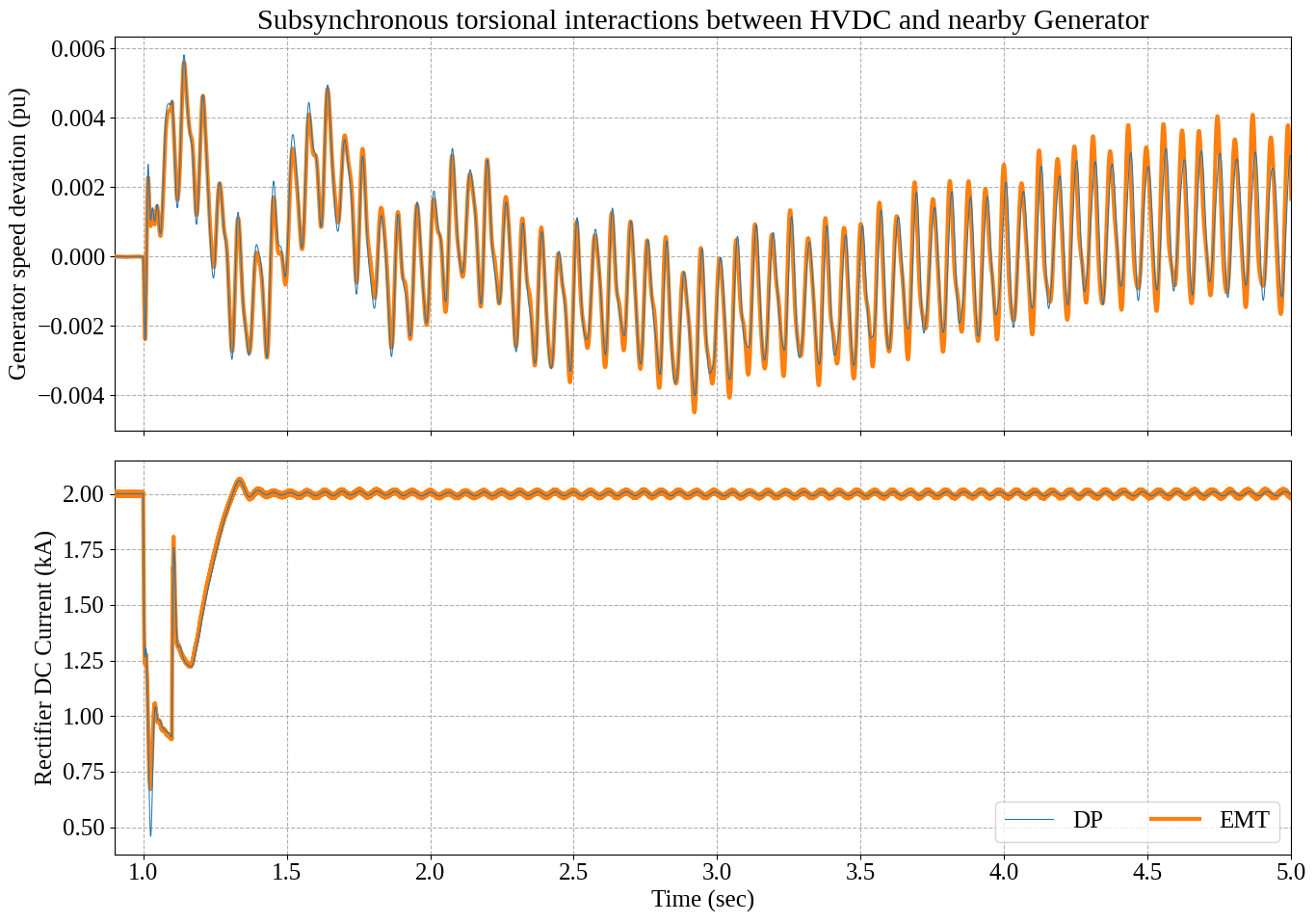